The True Cost of Hiring Someone for your QA Team

Quality Assurance (QA)  is a part of product crafting mistakenly considered not as important as code development. In fact, testing has to be an integral constituent, and the sooner you engage QA experts on the project —, the better your results. When it comes to reducing overhead, a key point is understanding your business goals and determining the desired success criteria.

There are two major options that companies include into consideration before product development: hiring in-house employees or distributed teams of developers and testers.

Professional software testing services are believed to be costly,  as they are a highly demanded solution in the world where ~1000 apps are released every day. Indeed, Glassdoor claims the average Quality Assurance Manager earns $70-100k yearly, while QA experts at companies such as IBM, Amazon, and Sapient earn $100k+. According to Salary.com, the average hourly wage for a Quality Assurance Engineer in the United States is $37 as of September 25, 2020, but the range typically falls between $34 and $41. Of course, hourly rates can vary widely depending on many important factors, including education, certifications, additional skills, or the number of years the engineer has spent in the profession. Possibly the biggest perk that can be obtained from in-house QA engineers is streamlined team management.

Outsourcing is cheaper than hiring in-house QA employees. However, not all of us know how cheap exactly it may be and why. Outsourcing’s cost reduction is often attributed to the fact that companies look towards overseas workers (considered offshoring) to complete the tasks but, even within your borders, outsourcing can contribute to reducing overhead in your operations byways of distributed teams, for example.

Distributed teams are only one way to complete the quality assurance portion of the operations process for a product or service. They’re a group of individuals specialized in key software processes that will put your product or service through rigorous testing before its release to the public. They’re the ones who catch the bugs and fix them early!

Now, the “distributed” part of the equation is what could potentially make this outsourcing option less expensive than hiring in-house QA engineers. Distributed teams allow for cost reductions because they’re already working for a specific company that takes care of their salaries, but they’re also not housed in a specific building or city. Distributed teams are distributed because they’re spread across countries and cities, yet converge in one specific place to make sure your business goals are being met— the internet. 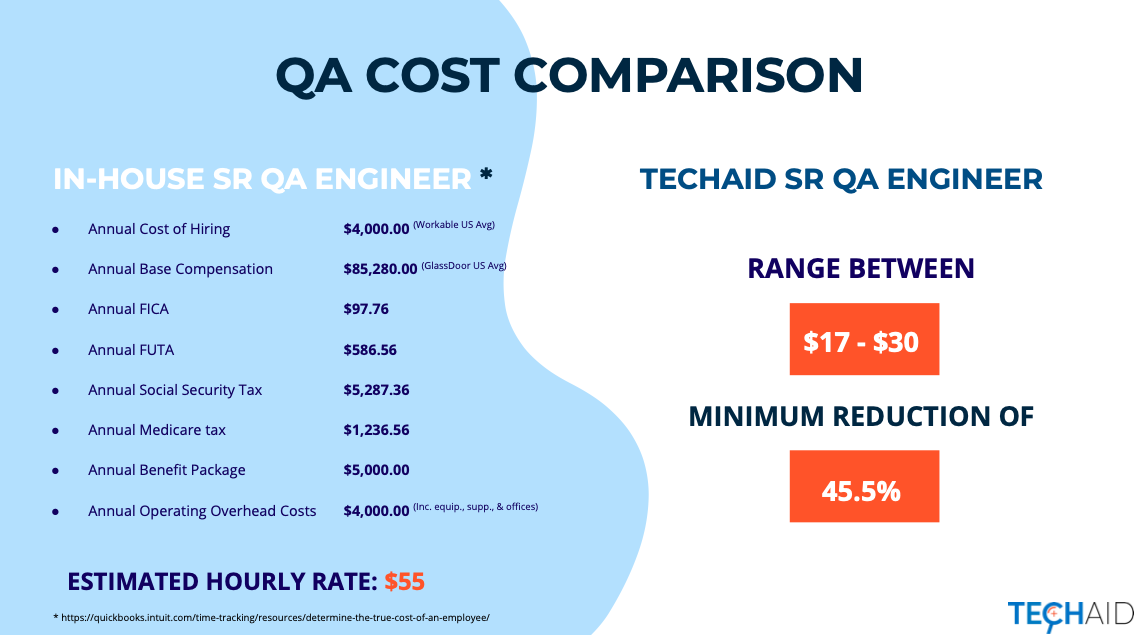 Outsourcing QA testing operations to distributed teams instead of hiring QA engineers for your company allows for an easier transition when it comes to bringing them to the workplace. In essence, distributed teams don’t become part of your company for longer than their contract allows, so you don’t have to worry about making sure everyone is best of friends before proceeding with getting their work done. Distributed teams jump on board as soon as they’re needed and hang around the sidelines if necessary, but once their work is done to your liking (and abides by contract standards) they’re able to move on to other clients and you’re able to focus on the next important step of your operations process— releasing your product or service.

Time to Make a Decision

If you’re ready to outsource your QA testing operations and reduce your overhead, don’t hesitate to contact us! TechAid makes sure our team of experts can fit their skills to your specific needs, helping you reach your business goals according to plan

Get in touch with us!

By Maria Tejeda
Next ›

How to Grow Your Team Without Losing Control

When starting a business, the main objective of any entrepreneur is to grow or maximize profit while reducing costs. However, once profit maximization becomes contingent on growing business to the tune of hiring more employees and increasing overhead, expenses start adding up. Not to mention…

How to choose the right Outsourcing Team for Staff Augmentation

With the integration of global markets and consumer demands increasing across industries, companies have resorted to outsourcing. Outsourcing refers to the act of a company transferring some of its business to a third-party. This can happen with marketing departments, customer service processes, and even other…